I have bought a lot of junk in my life. For that I blame Quinn.

Quinn was my college roommate. We were bonded by a love of fashion magazines–preferably foreign or obscure or foreign AND obscure–and it was never clear if we had anything in common beyond that. The Paris Vogue was hers and the British one was mine. She was the blond and I was the brunette. She wore flirty vintage dresses and kitten heels and I was the one with dark denim and Dr. Marten’s. Now, Docs may be timeless but believe me when I say that she was cool and I was NOT. Quinn was THAT girl: the one that all of the girls wanted to be and all of the boys wanted to be with. But that’s not why I was jealous (OK, maybe I was a LITTLE jealous of the boys.) What filled me with envy was her talent for finding really cool stuff at thrift stores.

Quinn was the first person I met who liked shopping at thrift stores not out of necessity but to find something unique, vintage, ironic…all of which were huge trends. Personally, I’d rather have browsed for irony at Urban Outfitters where I’m sure plenty of people don’t even understand what that means but at least they’d have my size. But that was somehow proof of how she was cooler than me and so I responded with enthusiasm every time she wanted to go thrifting—which was often. And at every single store we went to, I’d wonder: How could I have dismissed so many items that Quinn would then pick up and reveal to be the kind of treasure that only the truly with it and hip could appreciate?

Even though I longed to dress like Quinn, I felt uncomfortable being so dressed up all the time. I felt it far more achievable to co-opt her quirky aesthetic in the home. So, I bought my own beaten up knickknacks and bric-a-brac. And I bought A LOT. Her way with paint-by-numbers and ceramic squirrels was utterly charming and lent a Parisienne air to our apartment whereas my dozens of finds like these gilded cats with the dings and daffy faces remained looking like junk and didn’t fit in with anything else I owned. Again, I was jealous. And frustrated. And insecure. Everything in our apartment that people commented on as being cute and whimsical was hers and if anyone ever commented on any of my “treasures” it was to ask me why I tried so hard to be like Quinn.

Unfortunately, these golden cats from the thrift store did nothing to enhance my popularity. Here they await their glitter makeover.

Accumulating goofy animal figurines to be cool is pretty embarrassing but arguably better than doing drugs and when Quinn went away so did my thrift store knickknack habit. I stopped buying new ones and the ones I did have ended up either back at the thrift store or stored in a box at my parent’s house where they remained for more than a decade. During those 10 years, a lot has happened. Though I still wear dark denim and Doc Marten’s, I now wear a skinny jean instead of a bootcut. A loyal brunette, this summer I decided to go red. A lot has changed on the inside, too. I am still struggling to define myself but it’s been a long time since I did something just because I thought it would make me cool.

Quinn and I didn’t really stay in touch after graduating, which was ok. Looking back, there are plenty of reasons to assume her life wasn’t as perfect as I thought and I am sure had her own difficulties to deal with. But until I learn otherwise, I choose to remember her as she seemed to my college self: an authentic and unique individual who embraced all of her eccentricities. Though I still have many personal goals on which I continue to work, I can honestly say that I feel real joy in being who I am and I think that makes me pretty cool. Even Dr. Martens don’t complement everything as well as self-love!

And maybe these cats are not as dorky as I once thought but they certainly aren’t something I would have bought if it weren’t for the possibility that having them would suddenly make the boys and girls to whom I was invisible want to get to know me. If there is anything I’ve learned it’s that time heals what reason cannot… and glitter makes everything sparkle!

I really like glitter. It’s messy but effective at covering up dings and a variety of other imperfections. AND it’s pretty! Instead of putting the cats up for “adoption”, I decided to give them a glam makeover and find them a place in my new home. I chose Martha Stewart’s Extra Fine Glitter (the most amazing glitter ever!) in Charoite and mixed it with an equal parts Mod Podge. The glittery paste did not adhere evenly to the metallic statues so I sprinkled the glitter directly on top to get a nice coating. The 2nd and 3rd coats with the Glitter and Mod Podge mixture came out really well and I don’t think I put on any more after that. The details of the faces are not as clear with the glitter—which I expected—and I think that makes them look more modern. Is it just me or do they now look a bit like my Sphynx? My Sphynx sparkles and now these cats do, too! 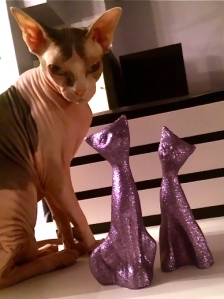 Photos cannot capture the cuteness of the Sphynx or the sparkle of the glitter!

Thank you for stopping by!

Hello. I love Cats and Crafts.

***The fake cats are glittered on purpose; the real cat is glittered only by accident.***

(I love my boyfriend, too.  He has also been glittered.  But this blog is not about him.)

However, if you were to ask me what else I love- REALLY LOVE – well, I might throw in that I like gluing stuff to other stuff (which I do! Though not as much as I love glittering stuff!) but then I’d probably stand pigeon-toed with my hands behind my back, staring at the ground.  Sure, I could mention that I LOVE Wonder Woman… but I used to be totally obsessed with Catwoman.  I could tell you about how much time I spend on Instagram…but it wasn’t that long ago I was glued to Pinterest.  And when it comes to careers, well, I’ve spent an equal amount of time thinking I of working in fashion as I would for a non-profit.

See? What I love today is not the same as what I loved yesterday. Tomorrow, I might like something that I once hated.  What I thought I wanted has changed so many times.  Now, I feel stuck and stressed because I don’t know what I want to do when I grow up AND because I’m pretty sure by most standard definitions I am, in fact, a grown-up. I’m going to figure it out…who I am, what is important to me, and how I can create a life that is most meaningful to me…